Wild and rugged Southern Fiordland is rich with history – this was the land of Māori, gold miners, whalers, conservationists, explorers and madmen!

Our History of Fiordland package takes you to some fascinating spots. As you fly over those gorgeous towering peaks, lush rainforest and glacier-carved valleys, we’ll bring to life the human history too. In particular, Dusky Sound, Preservation Inlet, Mt Sparrman and Puysegur Point all have rollicking tales. 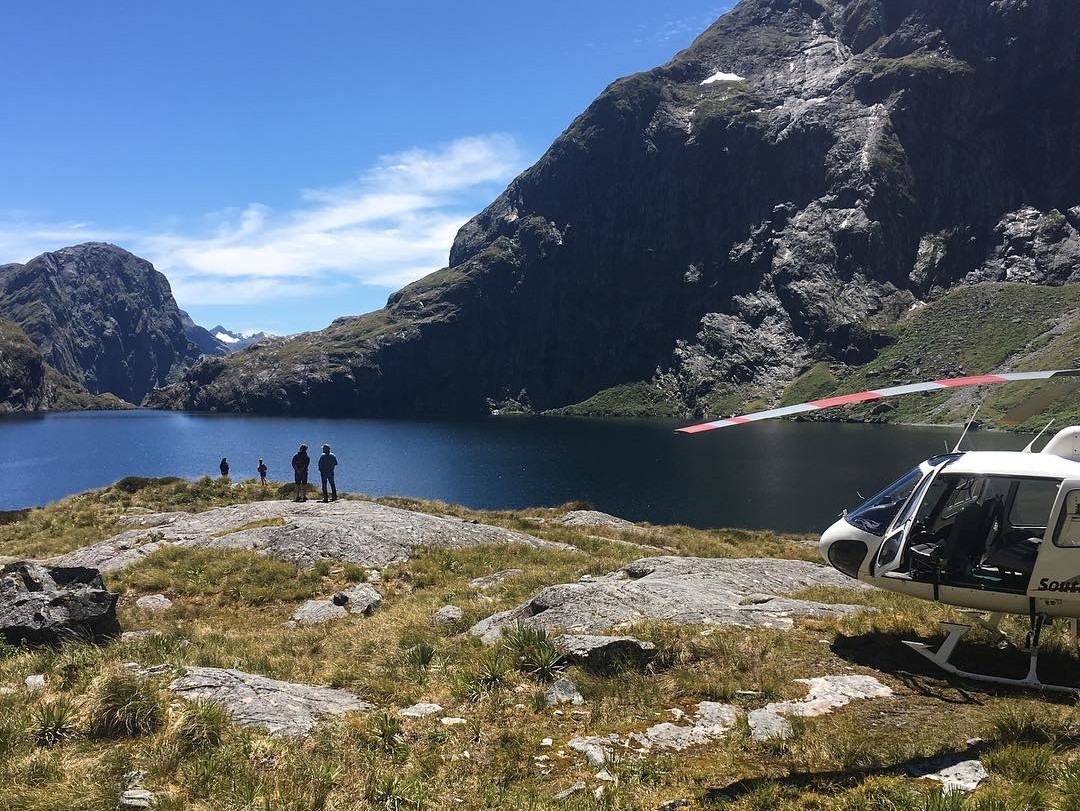 Flying over Dusky Sound, you’ll see it is one of Fiordland’s largest and most remote fiords, 40 kilometres long and dotted with more than 350 small islands (many of them now made predator-free). This is a place of both Māori and early European history. It is believed Māori sometimes camped near the waters here while hunting moa. On Captain Cook’s second voyage to New Zealand in 1773, the Resolution spent about six weeks in Dusky Sound for rest, recreation and exploration. He named much of the Sound – for example, Indian Island/Mamaku was so named because it was the first time the Resolution crew had come across a Māori family (and there is still evidence of Māori settlement visible here today). Luncheon Cove on Anchor Island was where the crew feasted on crayfish – it was also the site of New Zealand’s first European house.

Dusky Sound was the mainland’s prime site for harvesting fur seal skins, from 1792 until 1946. It is also where early conservationist and legend Richard Henry lived 1894-1908. He and his team moved more than 700 kakapo and kiwi to Resolution Island, in an attempt to save them from mammalian predators (it sadly failed – stoats could swim the channel). It was the first attempt at island conservation, something New Zealand is now famous for.

Our helicopter will touch down briefly on Mt Sparrman, near Dusky Sound. With its imposing tussock-covered dome at 781m, it stakes the claim of being the first substantial mountain climbed in New Zealand by Europeans. It was during the six weeks the Resolution spent in Dusky Sound that four of the crew slogged their way to the top, sweating in frock jackets, breeches and stockings. One of them was 25-year-old Swedish botanist Anders Sparrman, for whom the peak was named. They lit a fire in the dry “grass” at the summit to mark their climb (not recommended these days).

We’ll fly above the site of New Zealand’s first shore-based whaling station, built in 1829 in Preservation Inlet. Before electricity, whale oil was hot property, exported for use in everything, from soap to streetlamp fuel, to factory lubricants. American and British whaling vessels had been hunting whales in New Zealand waters since the 1790’s – they hunted the sperm whale almost to extinction. French and Australian ships joined and the next target was the southern right whales (tohorā), which were closer to shore and slower. Eventually it became more economic to set up shore-whaling stations, the first at Cuttle Cove. Six houses were built for 60 men, and sheds for up to 16 whaleboats. The beaches were reportedly “thickly strewn with whalebone and whale station refuse”. This station lasted until 1838 when it was abandoned, as the whales became fewer and fewer.

The Puysegur Point lighthouse on the corner of Rakituma/Preservation Inlet has a few good stories to tell – and it’s our last stop on the flight.

From 1879 until automation in 1980, the lighthouse had many keepers. At any one time, three keepers and their wives would live in the houses nearby. This was not the easiest lighthouse to keep. Keepers worked in almost constant bad weather, battling thousands of sandflies, and developed poor health from the damp and lack of fresh fruit and vegetables. At first, keepers would farm sheep near the lighthouse for fresh meat, but the gale-force and storm-force winds were so strong, sheep would be blown off the cliffs onto the rocks below. They eventually brought in cattle which were harder to knock over.

In 1942, the wooden lighthouse was burned down by a mad, gold-prospecting “hermit” who lived on the nearby Coal Island. He attacked the keeper, smashed the radio, and set fire to the lighthouse and a keeper’s house. One story is that the lighthouse light pulsed every 15 seconds through this man’s window at night, so destroying the lighthouse was a way for him to get some sleep.

Flying over Fiordland takes you to remote and wild places, some that are untouched but some that have incredibly rich human history. Maybe it is the impenetrable forests and treacherous coastlines, combined with the isolation, that attracts a certain type of unique and hardy people – and this always yields a good tale or two. We look forward to exploring these historic places with you.