Sit down with a cuppa for a chat with Richie Hunter and his easy, casual, and friendly manner wouldn’t have you thinking that he’s been at the frontline of major search and rescue operations in Fiordland.

Richie wears multiple hats here at Southern Lakes Helicopters. One of his three roles is as Safety Manager, which sees him ensuring necessary equipment and procedures are up-to-date on a daily basis, and upholding a “positive safety culture” too, as he describes it. That underlying, constant focus on safety includes being in regular liaison with doctors, paramedics, and search and rescue (SAR) teams, and also touching base with Civil Defence at the very top of the national safety hierarchy. This multi-agency communication means that emergency response is ready to be enacted at any time – like when an avid hunter on Stewart Island needs rescuing after several days lost in the undulating valley of dense bush. Or when the massive Fiordland floods of February 2021 hit and put hundreds of Great Walks enthusiasts in tricky, potentially fatal situations. 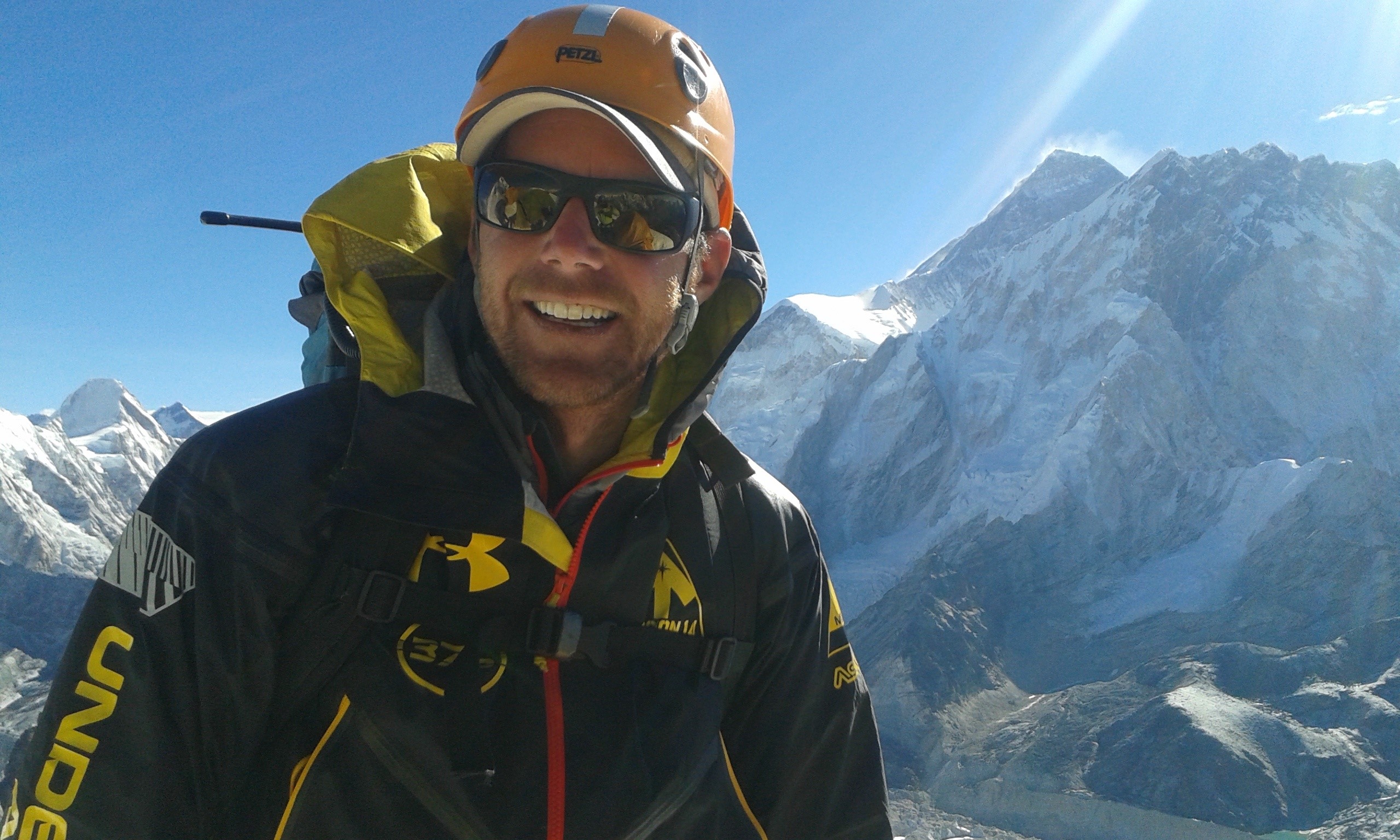 At the time of the 2020 floods, Richie was one of our Crewmen, out in the field, immersed in the thick of things. And it was an intense few days. From the 1st of February 2020 to the 4th, prolonged bouts of torrential rain hit the Fiordland National Park, with the heaviest rainfall occurring in the Milford Sound area, and a State of Emergency was declared.

On the first day of flood evacuations, all of our helicopters were rescuing people off Milford Road, as vehicles were stuck due to the rising water levels rising rapidly and washing the usable road away. Richie and the team were also starting to evacuate some of the huts, starting with the Milford and Hollyford tracks. That meant pilots and crewmen going in to assist people out of the huts and into the helicopters to eventual safe ground. Unfortunately, the temperamental weather didn’t allow for evacuations after dark, so they stood down, and interim briefings between all teams including the Police, Civil Defence, Department of Conservation, Medical and SAR – were held in the evening, to come up with a plan of attack for the following day. 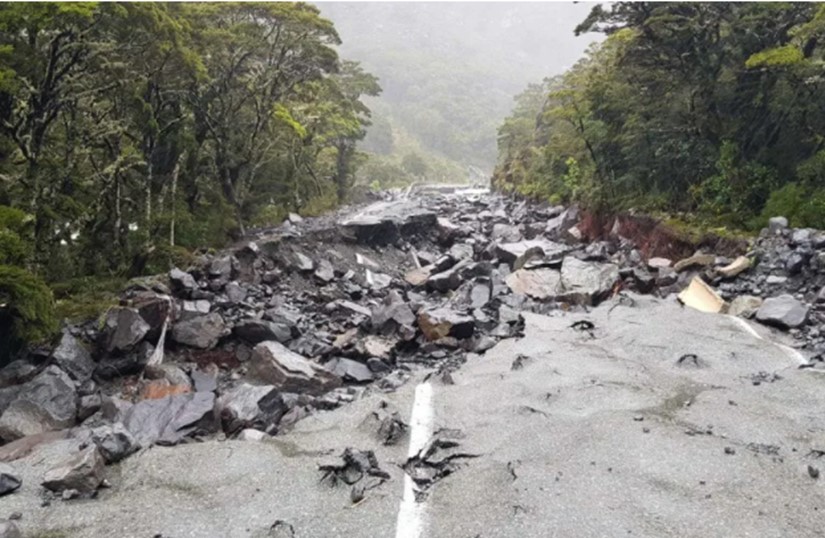 Day Two started at daybreak – 5am. Things were now very critical: while some huts did have radio communications through the night, there was no way of knowing what the situation was going to look like after several hours of persistent rain and flooding. But thanks to the constant conversation occurring between the Incident Management Team (IMT), the pilots, and the hut wardens, the whole operation mapped out the previous night could be re-prioritized as needed to make sure evacuation priorities were met.

As a Crewman, Richie worked closely with a water rescue team situated at the bottom of a ‘human long line’, a 100-foot-long line attached to the helicopter with a literal safety net at its end. This was placed beside hut windows to help evacuees scramble out of the near-submerged buildings via windows and from rooftops and into the net. The net was then flown about 700 metres to higher ground, a ‘staging area’ as they call it, to be ushered into a second helicopter and taken to another safe spot for assembly with other evacuees. It was then onto a final landing pad for the evacuees to be supported and assisted by paramedics and other critical response personnel. To give a sense of scale, about 500 people were taken from the Milford Sound interim staging area before being bused to Te Anau for further help. 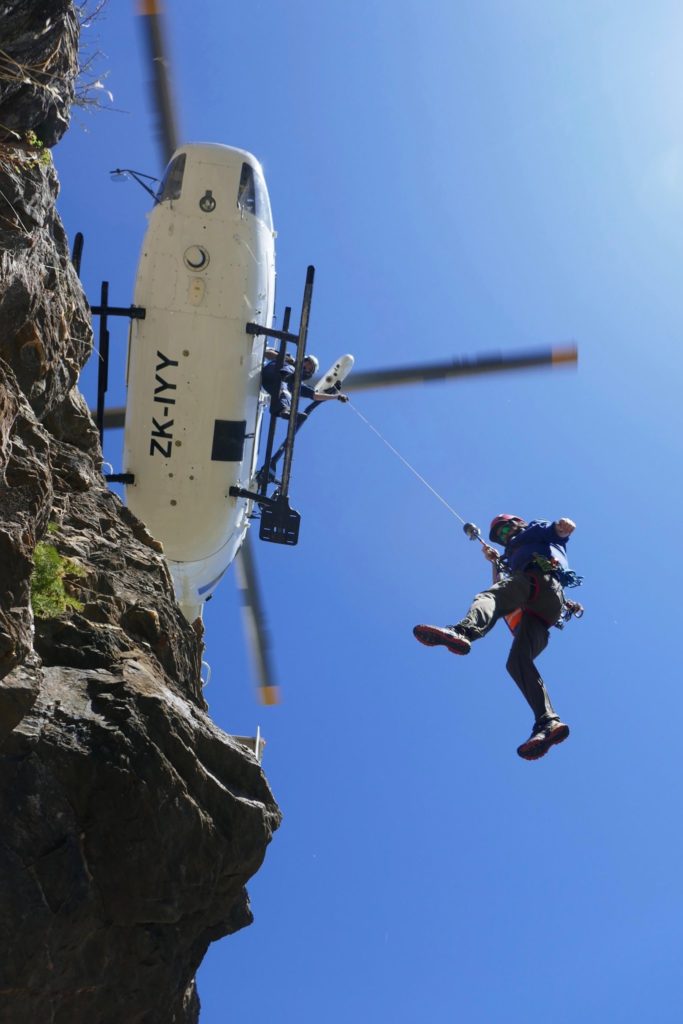 Example of winch operation in action

By the end of the second day, everyone that the teams knew were in the Park had been successfully extracted out to Te Anau. An extended search of the rest of the Park was undertaken – sweeping remote tracks, bridges and checking all of the huts to ensure there was nobody else caught out. The third day continued with further checks and sweeps of the other huts and tracks, but most of the day involved the mass evacuation of over 500 people from Milford Sound.

Richie’s emergency response expertise has been accrued over a long career in the outdoor education and safety industry. He has spent 19 years teaching others about safe alpine exploration and mountaineering, including leading the New Zealand Air Force alpine survival training up on Mt. Ruapehu to ensure Air Force crew know how to stay alive if a dire situation occurs in the snowy mountains of Canada all the way down to the South Pole. And for the past 9 years, he’s spent six months at a time in Antarctica in charge of the field safety operations, and leader of SAR team at Scott Base. To put it mildly, it has been an impressive evolution from school camps to pivotal safety personnel, so Richie is absolutely the right person to approach for safety advice before embarking on a Great Walk!

Here are his recommended key elements in developing your personal approach to safety:

1.      Appreciate your Own Capabilities

Says Richie, “this starts with time. You have to spend time in easy, safe terrain to develop the skills required for moving around more difficult terrain. If you jump the beginner stuff and jump into the hard stuff straight away, you might get away with it. You might get away with it for years. But without those really basic skills of navigation and map reading, river crossing, weather interpretation, survival skills like lighting fires, and critical decision-making – you could get caught out with devastating consequences. Your capabilities have to match the trip you want to take – prepare for it well, or choose a different trip. And as your skills and experience develop, you can then move into grappling more difficult terrain.”

Take a really hard look at the area you’re wanting to immerse yourself in. “Research on maps, study the weather forecast, where your huts are, and learn about the local hazards. A big one being seasonal hazards,” says Richie. “From June through to November, Fiordland has hazards like avalanches that catch out even tramping parties on tracks situated low in the valley beneath big mountains – it’s not just a threat to mountaineers in the alpine areas. People need to pay attention to the New Zealand Avalanche Advisory. Spring also introduces flooding hazards with an increase in precipitation and strong wind, as we saw on an extreme scale last February. So we get higher-flowing rivers due to both snow melt, and the rain which comes predominantly from the West.” People need to understand that during Spring the rivers can rise to levels that aren’t safe to cross due to afternoon snow melt, even on a day of good weather. These crossing points need to be factored in during their trip planning to ensure they aren’t having to commit to crossing large waterways during the afternoon.

Other than the right layers of clothing following your research in step 2, Richie has other key items that he urges you to take on your walk. “You must include a personal locator beacon. And I mean a minimum of one – it should really be more than that if you’re in a group because you could get separated for whatever reason.”

This part is crucial. “Set clear, written instructions of where you’re going, who with, where your vehicle is parked, and its registration details,” says Richie. “These need to be written in a text or email, not just verbalized over the phone,” he adds. “Super importantly, these written instructions to a trusted family member or friend has to include a Due Back Time and ‘Panic Date’”.

“So, for example, let’s say I’m gone now,” he continues, “and want to be back by 3pm on Friday afternoon. That’s my Due Back Time. If I haven’t returned then, don’t worry too much because I might have been delayed due to weather or high rivers. But if I’m not back by 12pm on Saturday, then you should worry. That’s the Panic Date.” The Due Back Time and Panic Dates are what Police Search and Rescue will consider in their development of a plan of action, including information about your skill level, local weather, and terrain, and these factors will help decide when or how to mobilise. Depending on these factors, a search might start with the Police driving up to the car park to check it out or chatting with people in the area about what they’ve sighted. Or it could also require a more hasty response by Helicopter tasking.

Richie has a few words of reassurance, too. “I’m really proud of the team at Southern Lakes Helicopters. Every team member here plays a critical part in the emergency response. From the office who are commanding flight following and communications, the pilots and the crew onboard the aircraft including our doctors and paramedics, and our engineers that keep our fleet safe and ready for tasking.  We have our daily operations, but we also all have an extremely high and specific skill-set that allows us to act cohesively and effectively in an emergency situation with the other national response teams we’re connected with. When the need arises, the dynamic shifts into a whole other gear, and I’m forever impressed with the teams’ ability to rescue people in need.”

So get out there and explore your own backyard, New Zealand. With a Great Walk or one of our tours, like the Fiordland Heli Hike that takes you right into the heart of this magical place. Stay safe and rest easy knowing that Richie and many other skilled response experts and teams are here to help if ever that time comes.